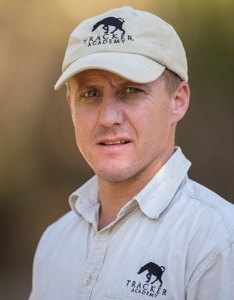 Alex spent his formative years growing up on a cattle farm in the Western Cape, South Africa. After completing studies in Marketing and Business Management, he joined the world-renowned Londolozi game reserve in 1995, as a game ranger. Alex worked as the environmental manager, presented for the marketing team and conducted specialised safaris. Alex’s greatest fascination is traditional skills of wildlife tracking.

He has dedicated much of his life to learning the ancient skill, eventually qualifying as one of a handful of tracker assessors in 2004 – the youngest ever to achieve this feat. Over the last two decades Alex has tracked jaguars in the Amazon jungle, bears in California, grizzlies and wolves in Montana, Pumas in Patagonia and the famous black-mane lions of the Kalahari.

Alex is the Director of the Tracker Academy, a NGO which trains unemployed people in traditional skills of tracking. He is also director and shareholder of EcoTraining, the largest private guide training school in Africa.

In addition to his conservation work, Alex has conducted diversity training leading courses aimed at facilitating a better understanding between black and white people working in corporate South Africa.

Alex is the founder of Nhlayisa Nutrition Solutions, a company which produces fortified foods for rural markets and bulk feeding. The company distributes over a million meals per year of its vitamin enriched products.

Alex is the co-author of the bestselling animal tracking book called the Tracker Manual. 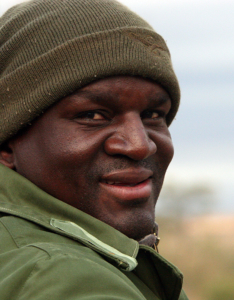 Renias Mhlongo was born in a mud hut in what is today the greater Kruger National Park. The Mhlongo family sustained themselves on the land by growing vegetables, tending cattle and hunting small game. Renias, almost as soon as he could walk, was sent out to tend the family’s cattle herd. He is one of the last people to be raised in the original traditions of a Shangaan hunter-gatherer.

During forced removals of Apartheid regime, Renias and his family were sent to a settlement called Dixie. Without any formal education, he was forced to seek work at a game reserve as a labourer. In 1984 he became a tracker at Londolozi – thereby putting to use his exceptional skills as a naturalist. Over the last 34 years Renias played a pivotal role in habituating the world-famous leopards of Londolozi.

Renias has conducted tracker training workshops in South Africa, Brazil, Kenya and North America – teaching people the traditional skills of trailing animals. In addition to his extensive experience with African animals he, with Alex, has tracked animals all over the world.

Renias is also a co-author of the Tracker Manual published by Struik Nature.

Renias has travelled internationally, and in so doing has touched many by the gracious manner with which he teaches people about African wildlife, culture and philosophy. Renias is a natural storyteller and he taught Alex the art of humorous storytelling, which comes out strongly in their motivational presentation, “The Power of Relationships”. During their inspirational presentation, Renias provides personal insights to relationship building and the power of diversity.

Watch this beautiful tribute to Renias