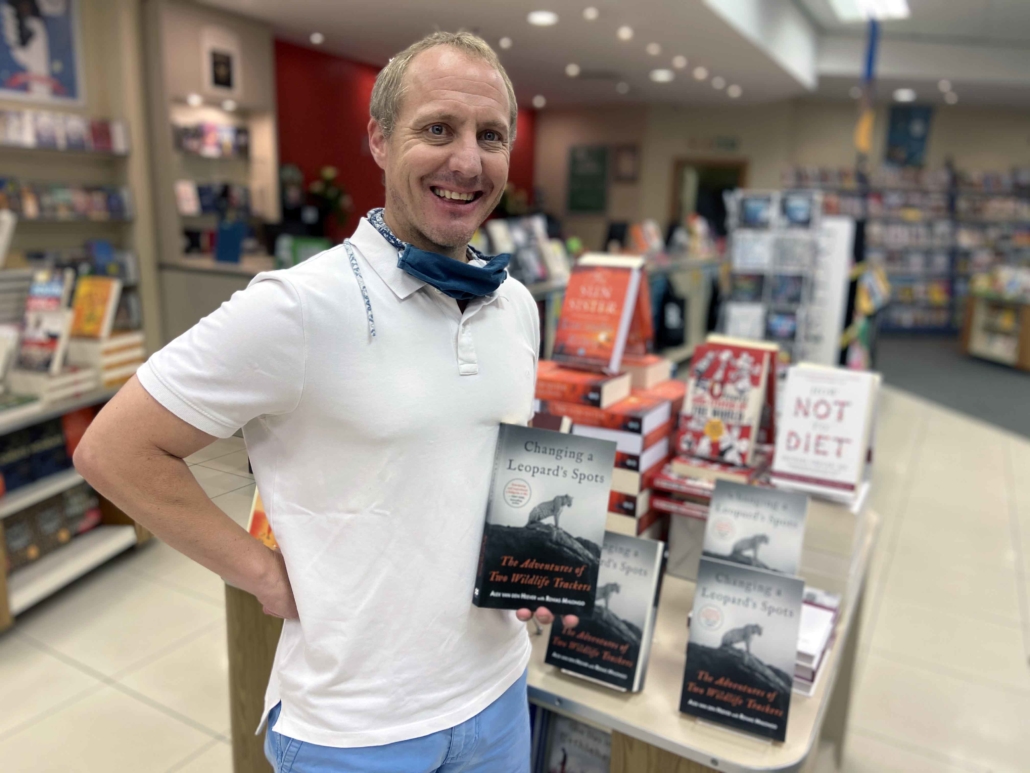 Alex with his book at Exclusive Books

The book may be ordered on Takealot

An extract from chapter called “Path of a tracker“

“Eventually the day came for my second attempt at the trailing component of the evaluation and, by extension, the full Senior Tracker qualification. Louis Liebenberg decided to conduct my evaluation at Londolozi, which did a lot to reduce my nervousness. We drove west from the Londolozi camp and stopped next to a small waterhole known as Guarri Pan, where I noticed evidence of a sin- gle lioness. I could see the tracks were reasonably fresh but I was concerned that committing to a lone lioness would present a particularly difficult trail for me to follow. I had no option, though; I could hardly ask the evaluators to look for a friendlier lion trail! Renias’s brother, Elmon, who had recently qualified as Senior Tracker, accompanied Louis and me in the capacity of observer and local expert and co-evaluator.

‘Good luck, mfo,’ said Elmon as I hauled my tracking stick off the Land Rover and climbed off. I could feel my nerves and I sensed I needed some good fortune so I was pleased to get his encouragement. I first scouted the area for a few minutes to establish the lioness’s direction. I desperately needed her to be going east or north as I knew that landscape intimately and it was also where the sandy soils were more conducive to seeing tracks. A southerly direction would also have been doable but not as good as east or north. West would be the worst outcome as the terrain there changed to the clayey black cotton soil, hard and dark, similar to the habitat where Renias grew up.

The lioness’s tracks crossed the road in front of me directly north of Guarri Pan and I started to trail her. Within five minutes of following her, she had changed her bearing and was heading directly west. This was the worst possible start and my uncle Philip’s often-mentioned words of advice, ‘It’s not about what happens to you but what you do about it,’ which had become something of a mantra for me at this time of my life, came into my head. I had no option but to keep trying. The lioness’s tracks then crossed a road, Elmon’s Kraal, named after an old man who used to live in the area, and I stopped there to have a good look at the condition of the tracks at that point. Another Land Rover had driven over her tracks, partially obscuring them and depositing a lot of dust onto them.

I carried on walking up the road for a few metres and discovered the tracks of another lioness. Two lionesses was a small gift, I thought to myself. The lionesses were walking about 10 metres away from each other, in parallel, and heading in the same direction. I was pretty sure I’d tracked the two lionesses in the same general area on one of my lone training sessions, and that gave me a sense of confidence. I was buoyed by this and I started to trail with good momentum and, for the time being, I felt good.

The trail then entered a woodland of long and drying grass where it was clear a host of other animals had spent the night. I’d just started to develop some sort of flow when the track totally disappeared. I looked up ahead but couldn’t find anything so I decided to play it safe and return to my last confirmed piece of evidence; a track superimposed on a buffalo dropping. I considered whether the lions were following the buffalo but I knew these lionesses and they were not known for hunting buffalo. I progressed painstakingly slowly for a few metres and was able to recognise another faint track, still heading west. Earlier that morning, while drinking my coffee, I’d heard lions calling a long way to the west and I wondered whether these lionesses were on their way to meet up with the rest of their pride.

I pressed on, cognisant that I shouldn’t get myself too caught up in the detail if the evidence wasn’t reliably there and so I made a mini prediction of where the trail was headed. This was my first attempt at anticipating the lionesses’ movements and is a part of the evaluation the evaluators are very critical of in a Senior Tracker test. I walked on a bearing I thought was the right one, and when I came upon a clear game path with open soil, I saw no tracks. My prediction of their direction of movement was wrong and I started to doubt myself. I began to question whether the tracks were even that fresh. Had the vehicle that had driven over the tracks perhaps travelled the previous afternoon? A feeling of dread filled my body and I found myself fundamentally re-examining and querying my original hypothesis and it caused me to hesitate.

What would Renias have done in this scenario? I ran over the events so far and remembered the feeling I’d had upon finding that lioness’s track, that familiar excitement whenever I saw a nice fresh lion track. I must be right, I thought. Speculating on a feeling was perhaps an imperfect approach and I was possibly grasping at straws. Maybe I’d never been very good at accurately ageing tracks, I said to myself. So many thoughts were running through my head, which was causing confusion and distracting me from the task at hand.

In an attempt to re-centre myself, I reminded myself that the last confirmed lion track I had seen had been heading up the slope towards the crest so I tentatively proceeded that way. I started thinking about how much fun I’d had practising my tracking skills over the last few months, and how this evaluation embodied the complete opposite. The test’s anxiety construct was in full gallop and it was causing me to question my every decision. If I was going to succeed I had to find a way to calm myself and focus. Thoughts such as ‘I need to pass this’ and ‘What will I say to people if I fail?’ were racing through my mind and were thwarting my ability to perform.

When I had been practising alone in the bush, I never had any of those thoughts and had never doubted myself, and consequently I was able to express myself freely in my ability to follow the tracks. I found some calmness within myself by consciously substituting all the limiting self-judgements I was making with one clear thought, ‘I will find.’ It was an old mantra of Renias’s that brought feelings of familiarity and freedom, feelings that had been eluding me up to this point.

If Renias had been there, he would’ve backed his ability to recognise a track up ahead in the knowledge that he’d made the correct decision and was headed in the right direction. I consciously made the decision to do the same. I surmised that there was nothing to suggest that the lions would suddenly change their direction.”

Exclusive Books is open and selling our book. Alternatively, you can order on TAKEALOT here.